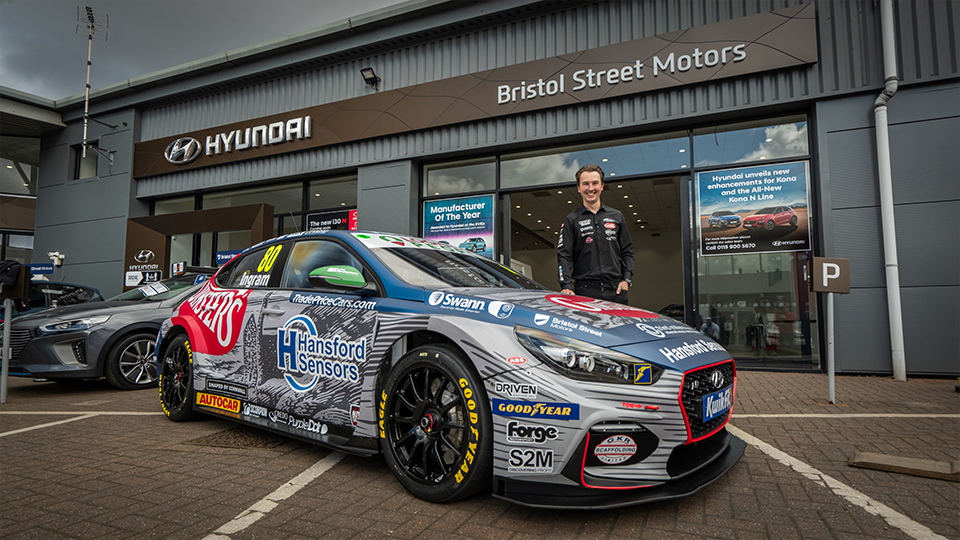 Excelr8ing towards the start of the season

It wasn’t your average Sunday on the 11th April. It was an exciting day of filming with Tom Ingram, taking a first look at his new Hyundai i30 N livery that he’ll be racing next season for EXCELR8 Motorsport. The team spent the day at the home of Ingram’s sponsors for 2021- Bristol Street Motors Nottingham.

Momentum was employed following the previous Tingram team announcement with EXCELR8, where Tom Ingram revealed the team he would be driving for. Now we were tasked with unveiling the car livery – this time as long-form video content. The video had to be shot, edited and posted within the same day. This was in order to launch the livery on Sunday evening, prior to Bristol Street Motors opening the next day.

The first look at the BTCC car shows off the livery in typical Tom style, with his bubbly character and sense of humour showing true, as he ventured to the dealership to acquire his ideal race car. Tom and the sales representative unveil the i30 N for all to see, with Tom humorously offering a part exchange for his Toyota. This reflects Momentum’s ability to not only shoot video but co-choreograph scenes to tell a real story.

Contending for the title

Tom Ingram has always raced as an independent driver, so this year will be the first time he races as part of team. So, telling a story was imperative to capture his audience’s attention, as well as that of the EXCELR8 team and his partners. What did you think of the unveiling?

We know that every brief is different, so our experienced in-house video production crew tailor bespoke cost-effective packages that suit exact requirements. Here’s what Tom had to say:

“In terms of getting a script together and shooting video, Momentum are always great to work with. They deliver exactly what we need, when we need it. The livery unveiling was a success and I hope the audience enjoyed it as much as I did.”