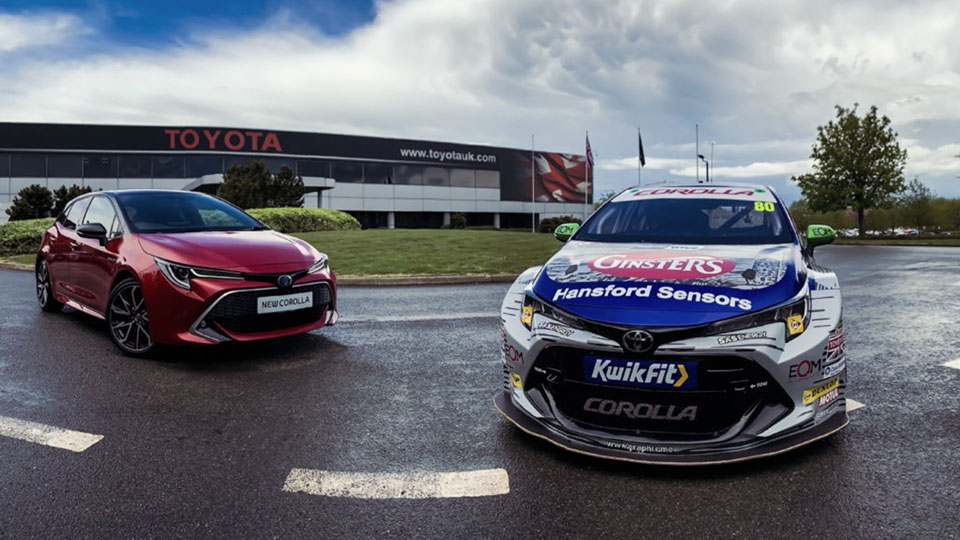 After following Tom Ingram and Speedworks Motorsport successes in the BTCC for many years. Momentum is delighted to join the team at Toyota’s UK headquarters. The video intended to cover the new Toyota Corolla and its entry into the BTCC; documenting the next steps as Tom took on the new season as a factory driver.

The team were granted access to the Toyota Manufacturing plant for a full day for the product activation. This allowed us to see behind the scenes of how the Toyota Corolla is made. As Tom’s new BTCC car is based on the Corolla, which was being manufactured in real-time. Momentum captured the process, providing unrivalled insight into Toyota’s complex engineering automation and staff. Additionally, the access allowed us to give fans a never-before-seen look behind the curtain; drawing comparisons between Tom’s race car and the road car, which is available for purchase in the UK.

Following the visit to Toyota, the team joined Tom at the BTCC race weekend. However, this was no normal race meeting. In fact, Tom was about to hit the track in front of 4,000 Toyota UK employees, driving the car they manufacture every day. With the weight of his new manufacturer weighing heavy on his shoulders and 4,000 extra fans cheering him on. Tom steadily progressed through the grid, until fate put him on pole in the race three reverse grid draw. Tom pulled off the victory and brought it home in front of the whole team. A fine end to what was a spectacular event.

The video Momentum captured could not have gone any better. With the help of Speedworks and Toyota UK we were granted an exclusive view on the factory and even got the BTCC car on to the production line with the other Corollas. The footage was captured in collaboration with the BTCC. It premiered on the launch of the new BTCC app, which can be found here: btcc.net/app. On top of all this, the 4,000 Toyota employees were engaged and got the chance to enjoy the action. Seeing Tom bring the win home in the final race was the cherry on the cake. As a result of this success, Momentum will continue to deliver engaging social content to some of the most notable brands in the racing industry.

WE’RE ALWAYS KEEN TO HEAR FROM YOU, FANCY A CHAT?