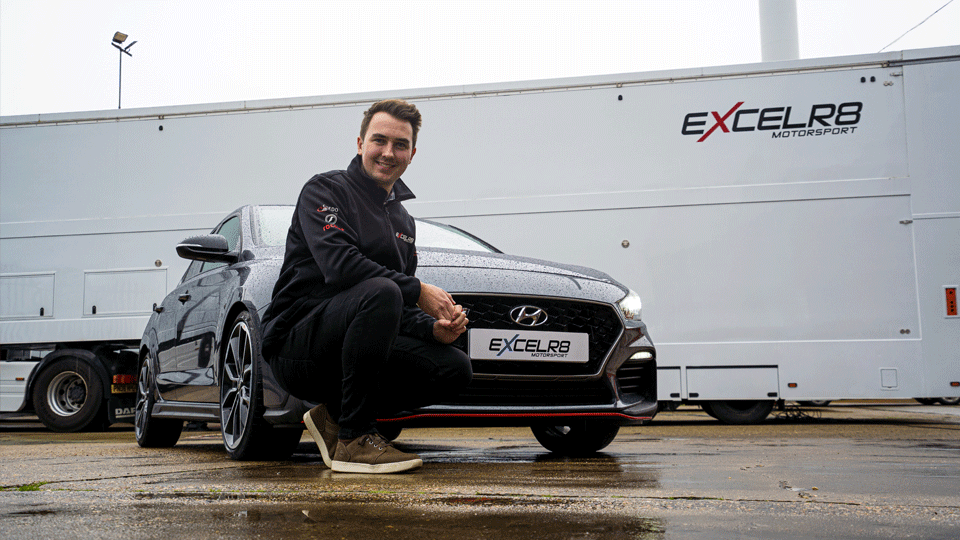 After nearly a decade competing at the front of the Kwik-Fit British Touring Car Championship – racking up 16 race victories, over 40 podiums and a brace of Independents Trophy titles in the process – this week marked a significant milestone for Tom Ingram. For the first time in his career, ‘Tingram’ moved teams, swapping the Speedworks Toyota Corolla for his new, Excelr8 Motorsport-run Hyundai i30 N Fastback Performance challenger.

Ingram turned to the expert in-house team at Momentum Social, enlisting our help to produce video content unveiling the big news to his partners – among them Ginsters and Hansford Sensors – and passionate fanbase up and down the country. The first of two pieces centred on Ingram’s track record in the nation’s premier tin-top series, using a combination of archive and bespoke footage to tease the date of the announcement on his social media channels.

The second – entirely produced on site at Excler8’s state-of-the-art facilities in Suffolk – finally broke the story and went down a storm online, generating an organic reach of over 187,000 people and nearly 15,000 engagements. Capturing audience attention online has never been so crucial, and the results set Ingram, the Excler8 team and his partners in good stead as the clock ticks down to the start of the 2021 season in May.

“It seems crazy to think, but in almost a decade of racing in the Kwik-Fit British Touring Car Championship, this is the first time I’ve moved teams,” said Ingram.

“That definitely gave everything an added significance, and it was absolutely crucial for myself, and my partners, to get the news out to our brilliant fanbase with a real impact.

“Working with the team at Momentum Social certainly provided that; their team took care of everything from concept to final delivery, and the finished product is a true testament to the talent they have in-house, and the professionalism with which they go about their work.

“As far as agencies go, they’re always a pleasure to work with, and everything is delivered exactly as briefed, first time. The entire project went better than we could have hoped for, and really set the tone for what I hope will be an equally exciting season ahead!”

DID YOU SEE THE LAUNCH? CONTACT MOMENTUM’S MEDIA TEAM.