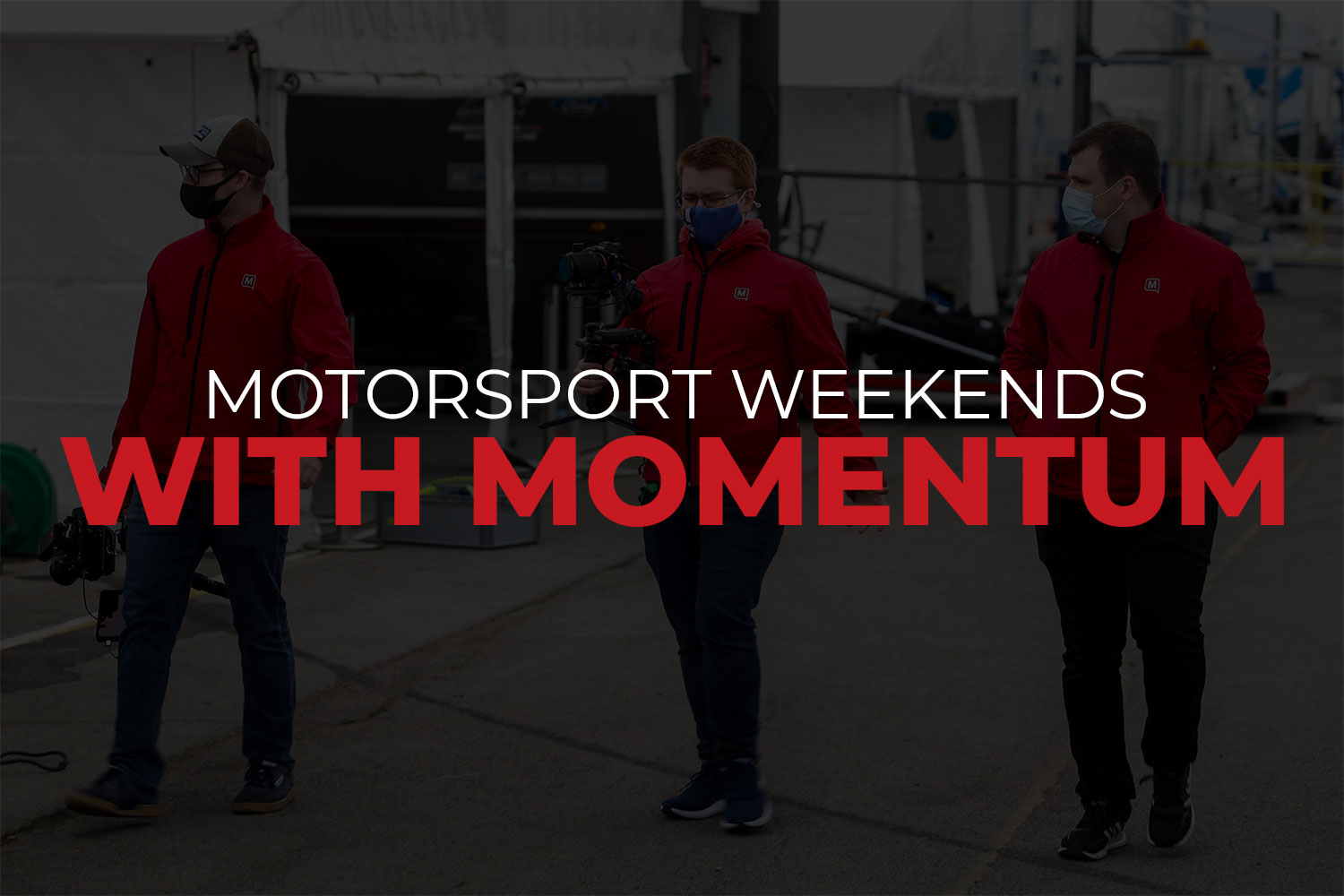 Motorsport weekends are a blitz of non-stop action at Momentum, with the team full steam ahead across the whole weekend. Prior to getting started on Friday, the team will ensure all kit is prepped, cameras are packed with memory cards, and everything is fully charged up and squared away.

Depending on how far away the circuit is, the team will travel on Thursday evening or the early hours of Friday around 7AM. The day kicks off around 10AM and it’s all systems go to cover two practice sessions. It’s the first chance for the team to do a track walk and engage with teams in the paddock.

Prior to arriving at the circuit, the video team will have written a script of what to capture the day before – re-jigging the story on the fly depending on how the day plays out. Friday sets the tone to start producing visual and written content – such as On The Limit footage, social media posts and bespoke graphics. Momentum does a lot of work for Kwik Fit in terms of storyboarding and filming certain features personalised for each race weekend.

The video team will take their kit to do interviews that’re light-hearted, easy going and provide a setting for the weekend. The aim here is to build a general setting to capture shots and further establish the story for the BTCC weekend. This is the perfect opportunity to chat with the drivers and gauge their emotions around preparations on the car in the allocated time.

Re-jigging the story as things progress is necessary due the nature of the sport. It’s very unpredictable which makes our work reactive. But there is a sense of routine to the workflow, basically just reacting to what unfolds in the sessions.

The social team will cover the session and create content for the BTCC channels – mocking up bespoke graphics as templates for timetables, qualifying grids and drivers’ standings, as well as race reports. In addition to producing social content for Kwik Fit’s channels throughout the weekend, coupled with graphics for the new 2021 #KFPowerRankings. Whereas the video team will be capturing the action, including what’s going on for the On The Limit docu-series, which means floating between the three drivers and teams. These include Ash Sutton from Laser Tools Racing, Tom Chilton from Car Gods and Aron Taylor-Smith from Team HARD.

Going between the three pit boxes depends entirely on the action. Our videographer will react to the race results and gauge where best to film throughout the day. In addition to jumping in the pits for free practice to get views across the pitlane as well as car shots over the rumble strips. When qualifying starts, it’s all hands-on deck in the pits, with hard time to get the most interesting reactions.

Momentum works tirelessly across the three races, creating bespoke graphics, writing social media and website content, and filming the action. The video team will shoot each of the three races, whilst trying to film the inner ongoings of the paddock – visiting different teams. Lead engineers from the three teams starring in On The Limit are mic’d up to better track what’s going on to gather context and improve storytelling – bouncing around the teams to get the best coverage on the stars for optimal storytelling. The shooting plan is altered throughout the day depending on how things are going.

When the chequered flag falls on Race 3, the focus is providing the last of the coverage, whilst prepping post-weekend race reports and social media content for the week ahead. Video footage is collated, downloaded and synced up ready to be edited throughout the week.

Join Momentum behind the scenes with more race-day content to come!